Every so often you come across a real history gem, and if it wasn’t for my Brother in law who works for the Royal mail, and have their northern distribution centre built on top of an old airfield, I would  not have known that one of the biggest USAAF supply bases during world war 2 was right next door to where I lived for 5 years.

There is not a lot left now expect a small heritage centre managed by a group of staunch volunteers. The display centre is no bigger than your average college school hall but it is pact with some amazing artefacts left by the Americans when they departed in 1965.

So quick history
RAF Burtonwood was the largest military airbase in the UK during World War Two and was responsible for the handling of over 15,000 aircraft of the United States 8th 9th 12th and 15th Air Forces, covering the geographical are of the UK, Europe, Mediterranean and the Middle East.  In addition to the 18,500 US servicemen and women base at Burtonwood, it was also responsible for another 30 bases in the UK and probably over 50,000 personnel in all.
Built as an RAF Base, Burtonwood opened in April 1940 just in time to supply Spitfires to the Battle of Britain. Simultaneously a Civilian Aircraft Factory, known as Burtonwood Repair Depot, was developed, with them both using the same airfield. The RAF gave up the base to the Americans in 1942, but took it back after the war in 1946. In fact, Burtonwood was the last American base in the UK to be handed back to the RAF.  After two years acting as a storage depot for surplus RAF aircraft, it was passed back to the Americans in 1948, to support the US strategic bombers stationed in the UK. It housed and overhauled US aircraft taking part in the Berlin Air Lift.
American Operational Flying ceased in 1959, although the RAF used Burtonwood as a V Bomber scatter airfield until 1966. The base was taken over by the US Army in 1967 as a storage base for war supplies in case war broke out in Europe. It remained this way until 1993 when the end of the Cold War heralded the end of the necessary deterrent. The US Army 47th Area Support Group supplied subsequent operations including relief, food and materials for the conflicts in Europe.
So photos, well not a lot really. I mainly took shots of old posters and original images. But the heritage centre is well stocked with mechanical components, and even today construction around d the area is uncovering bit and pieces. In fact the week visited a construction company had contacted the centre to advise that they had uncovered several meters of the metal honeycomb runway which was laid down, and several tool boxes.
Special Note: Some of my photos are of real photos which where on display. and therefore I cannot take credit for them. 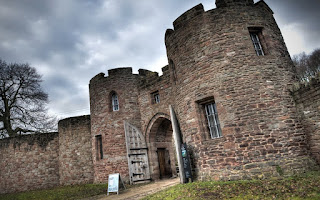